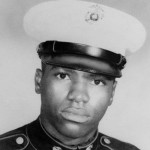 Dan Bullock was the youngest U.S. service man to perish in Vietnam. He was 15 years when he was killed. He had gone through boot camp at Paris Island, S.C., when he was only 14. He had altered his birth certificate to show that he was four years older than he was.

Bullock grew up in Goldsboro, but moved to Brooklyn, N.Y., when he was 11 after his father remarried. He wanted to be a policeman, a fireman or a soldier.

He was killed on June 7, 1969. Earlier in the day one of his companions injured his thumb and could not stand guard duty. Bullock, who had been assigned other duties, switched with his friend and was killed during a North Vietnamese attack.

He was buried without military honors and his grave was not marked for the next 31 years. Sally Jessy Raphael, a TV personality, purchased him a grave stone. He is buried in Goldsboro, NC and is honored on the Vietnam Veterans Memorial on Panel 23W, Line 96. 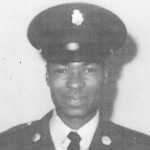 PFC Frederick L. Martin was a state high school long jump at the all-Black J.T. Barber High School in New Bern. He was awarded a track scholarship to Fayetteville State, but chose to enlist in the U.S. Army, knowing that Vietnam probably was in his future. He believed it was his patriotic duty to go.

Luke Martin, Sr., his grandfather, escaped slavery and found refuge in New Bern before fighting with Union forces during the Civil War. When Luke, Sr., was 80 years old, his wife had a son, Luke, Jr., Frederick’s father.

The 6-foot-5, 190lb Martin was killed by a land mine. He is honored on the Vietnam Veterans Memorial on Panel 42E, Line 7.